On March 11, 2019, an art demonstration (international exhibition) of the artworks of women artists on the theme “Peace. Love. Justice» will take place in Jerusalem:
a) real works (painting, sculpture, installations, art photography, etc.)
b) an exhibition of art works on cakes, pastries, cookies and sweets under the auspices of the newspaper “Sweet News Daily” (food printer, participants’ geography is not limited).
c) catwalk.

We invite everyone to cooperate with us and join the celebration! 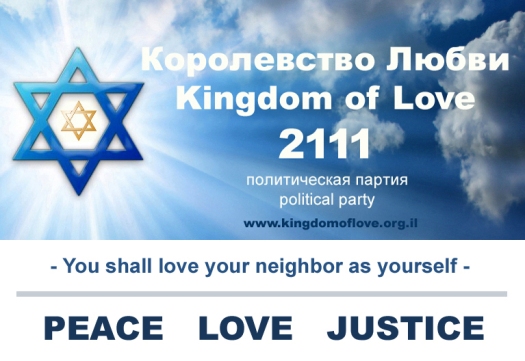 On January 25, 2019, an official campaign to raise funds for the registration of a new national political party called the “Kingdom of Love 2111” started in Israel.

Party fundraising is built transparently and exclusively on the principle of public financing in order to exclude the influence of large businesses or oligarchy groups on its agenda and future activities. The campaign was launched on the most well-known and reliable platform in Israel, Israelgives, which allows generating reports and tracking in real time in order to know who helps to establish a new political structure.

The party already has a multilingual website on the Internet, the development of the final version of the program is in full swing, in the creation of which all citizens of the country with an active lifestyle are invited to participate. The founder and leader of the party is Milana Gorenstein, an international lawyer, a writer, a journalist and a public figure.

The ideological basis of the new party is love and harmony, and its motto is “Love your neighbor as yourself.” The Kingdom of Love 2111 sets as its main goal the neutralization of hatred in Israeli society in all forms and the creation of conditions for harmonious spiritual and physical development of every citizen in the country. The platform called “PEACE, LOVE, JUSTICE” covers all aspects of the State  functioning. It is different from the programs of all parties that exist in Israel, offering the citizens of Israel a new ideology and a better social model. Special attention is paid to foreign policy issues (Iran, the Palestinian National Authority) and the spiritual security of the society.

The main points of the platform are: abolition of the post of President of Israel and the Basic Law on the President (1964); change in the government forming procedure and the actual separation of powers; adoption of the constitution and establishment of the Constitutional Court in Israel; total eradication of corruption without the right to re-occupy public office for persons convicted of crimes related to deception of public trust; police reform; creation of a really balanced, socially-oriented state with working social elevators and a free, but responsible, market economy; innovations in economics, education, healthcare and transport; reduction of artificially high cost of living;  construction of a sufficient number of housing units for all social groups; adoption of the first law in the world on insurance of Female Beauty and state certification of cosmetic services; support for women in management positions; active support of cultural institutions and persons engaged in all types of creativity; affordable higher education for all citizens; animal care and new environmental legislation; development of Jerusalem, the one and indivisible capital of Israel; all State Bodies, without exception,  are accountable to the citizens.

To register a party, support of at least 100 citizens is necessary, and to occupy a leading position in the Israeli political horizon it will need 20,000 loyal party members. Currently, negotiations on partnerships are underway with public and political structures in Israel as well as with Israel support groups in the United States. Initiative citizens and organizations that are ready to take part in the formation of the party, its registration and fruitful work are invited to apply to the party Headquarters. Official party website — www.kingdomoflove.org.il